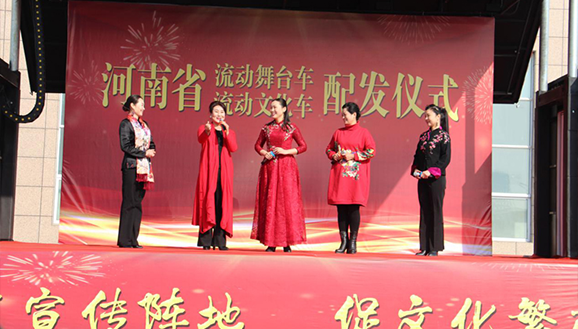 Henan mobile stage vehicle, mobile culture vehicle distribution ceremony In order to implement the major deployment of the 19th National Congress of the Communist Party of China on cultural work, the actual operation of the internship of the General Secretary of the General Secretary of the People’s Republic of China, the letter of the General Secretary of the Central Committee of the People’s Republic of China, encouraged the Wulan animal husbandry team to always be the “red art light cavalry” spirit on the grassland, by the Provincial Department of Culture and the Provincial Department of Finance. Sponsored by the Provincial Poverty Alleviation Office and the Changge Municipal Government, the distribution ceremony of the mobile stage vehicles and mobile culture vehicles in Henan Province, hosted by the Yellow River Group Henan Swan Vehicle Co., Ltd., was held on February 6, 2018 at the Changge Sports Center.